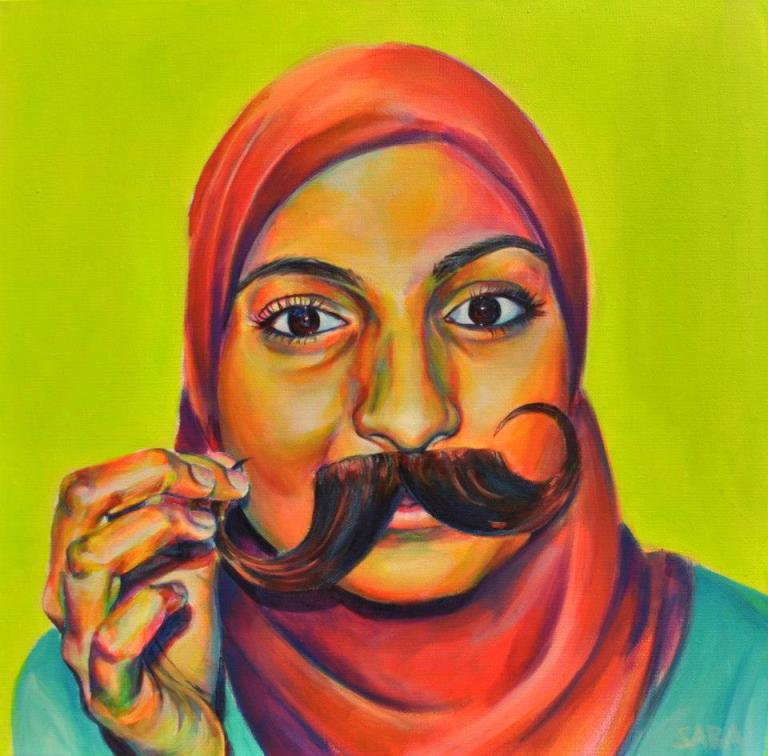 The silence around feminism and religion is a profound one, and I think some of its roots lie in the narrative of secularism and its influence on feminism in both the academy and in feminist social movements. I think the silence functions to highlight a difficulty in approaching the subject of female autonomy in relation to religion, but also indicates a negativity towards religion on the part of feminist scholars –justified or not.

Although there has been a significant amount of work on religion and patriarchy (Dominance of a society by men, or the values that uphold such dominance.) as well as on agency, autonomy, and gender; there has less on the subject of women, religion and autonomy.

In an article by the theologian Elina Vuola, she argues that a shallow view of religion in the part of feminist scholars has meant that they do not see the full picture:

Often where there is a focus on women and religion, the focus is problematic as it reproduces religion as inherently patriarchal and women as lacking autonomy in relation to said religion.

So firstly I think there is an important underlying point about the connection between what I’ll call mainstream Western feminism and that of secularism – the idea that to be feminist one much reject entirely religion. And I think this is in some ways due to the history of feminism in Europe which links back to the Enlightenment with its focus on rationalism and rejection of religion from influence on public life – promoting instead a secular humanism.

Though there has been various writers and thinkers who have in the 20th century critiqued secular humanism by focussing on the tragedy of colonialism and those who have help to de-center Europe by critically questioning the Enlightenment and the centrality of secularism.

These scholars and thinkers also have attempted to show the ways in which the European Judeo-Christian heritage of secularism which emphasizes the negation of religion was used (is still being used) to form the identity of modernism. In other words to be modern/progressive is to be European and to believe in the ideals of the Enlightenment and secularism. To hold a different individual or social relationship to religion or secularism thus makes one anti-modern. And this emphasis on modernity served to construct Islam (as opposed to Judeo-Christianity) as outside of modernity.

Within feminism though there has always been streams especially those coming from post-colonial backgrounds or black or native American and first nation feminists  who have never been overtly secular, and religion and and in particular spirituality has long been central to their worldviews and work, in stark contrast to mainstream feminism.

What we think of as feminism today (mainstream Western feminism) has evolved mainly from the early 20th century – what we call first and second wave feminist movements in Europe and America with their emphasis first on voting rights (suffrage) for women and then moved later on to broaden out to include issues of sexuality, reproductive rights and the workplace.

Whilst feminism has come to incorporate a wider variety of experiences and analysis since the ‘second wave’ in the 1970’s many of its assumptions such as objectivity in research, universal truths or essentialist notions of what it means to be a woman have changed very little.

There is an important anthropologist in the field of post-colonial studies called Chandra Mohanty who has reflected a lot on this issue of the construction of women outside Euro-America in those places we used to call the “third world” by feminists in the first world and how our understandings have been heavily influenced by underlying assumptions that are problematic and those include:

So what is important then is to think about the ways in which our understanding of ‘third world women’ and I would include Muslim women in that category have been presented to us by scholars and the media, inscribed within relations of power

And noticing more broadly that our world view comes to us as a product of our location within a global system that is made up of specific relations of power, that include systems of material inequality – like capitalism, but also systems of inequality that are cultural and rely on narratives of inequality like the supremecy of the White race or of identities such as European or American or heterosexual.

And that is why Black American feminists were the first to argue that mainstream feminism did not, and could not, represent their experiences by only taking gender into account as the most important variable, but insisted that their realities were far more complex than this. And that is what led Kimberlé Crenshaw, to point out that feminist theory remains largely white and therefore its potential to include non-privileged women remains unrealized.

And I make these points because I think this construction of the ‘third world woman’ as a homogenous and disempowered is very similar to the construction of religious women as uniformly and automatically oppressed or suffering from false consciousness, who cannot or will not see the inherent patriarchy in religion.

When it comes to Muslim women, this is amplified due to the already-prevalent idea that Muslim women are oppressed and victimized and this blanketed depiction of religion as oppressive raises the important issue, in my mind of subjectivity and agency.

So for example where women choose to submit themselves to a higher power and do not interpret this as a form of oppression is it right to just label them as having a false consciousness?

This is talked about in a book by Saba Mahmood in her study of Islamist women in Cairo, who effectively challenged social norms as an act of obedience to God. And who described how they understood their actions as a voluntary obedience to a transcendental power, not men or patriarchal systems.

And I think this illustrates how disciplinary practices of religious people can often show both how one becomes subjected to relations of power but also creates space within those relations for the exercise of agency, a concept Foucault discussed by stating that the same conditions that damage can also lead to resistance or transcendence.

Other authors have worked on the agency and autonomy of Muslim women by putting a spotlight on the process of re-interpretation and contextualization of the Islamic sacred texts – like the Qur’an.

There is a scholar Asma Barlas who discusses questions of religious knowledge and religious authority to show how patriarchy has been read into the Qur’an and argues that the Qur’an supports complete gender equality.

Another scholar Judith Tucker’s work has tried to understand how Islamic scholars have interpreted issues related to women and gender roles over time and she argues that Islamic law has been more fluid and flexible than is often assumed, and that women’s concerns and needs have influenced fatwas given by scholars.

And I’m thinking here too, in light of the marriage referendum of Kecia Ali’s book, Sexual Ethics in Islam, which explores what makes an act or belief ethical in the eyes of God and how many Islamic authorities claim that homosexuality is categorically forbidden but how the reality is much less clear cut.

Although not all of these people consider themselves Islamic feminists, their work has been central to challenging male authority and interpretative privilege in Islam, and re-centering women’s autonomy with female agency at the core.

Gender within Islamist movements has also been studied. Nilufer Göle and Barbara Pusch have both written about the phenomenon of feminism being articulated by women within the Islamist movement in Turkey, and argues that the structures within Islamism that reproduce gender inequality are making these women question issues of gender in Islam (as opposed to leaving Islam).

Despite this, women working from within Islamic movements or interpretations often have the effect of further reproducing patriarchal norms. Mahmood has pointed out that the women she worked with in Cairo—part of the “Islamic revival movement”—chose to be part of structures that view women as unequal to men.

And this does raises some questions about choice feminism, which has come to dominate critiques of mainstream Western feminism. Portraying feminism as the “freedom to choose” does raise questions about what to do when women choose to be part of structures that view men as superior and thus reproduce forms of gender inequality.

I think one way to reconcile agency with religion is to reconceptualize the concept of agency itself – where, for example, women who use religion to displace social norms reflect a capacity for action. And in this perspective, agency and autonomy can be found where there are challenges to power and thus an attempt by religious women to challenge social norms reflects an act of agency, not insubordination.

Many discussions that revolve around patriarchy and religion assume an essentialized version of religion that may not exist in the lived realities of all religious women – and this is especially true in terms of the way Islam is portrayed in the West.

Islam has long played a central role in feminist debates, but has consistently been defined as being outside of the parameters set by Western mainstream feminism and thus as intrinsically patriarchal – I am reminded here particularly of femen.

This does not negate the fact, however, that to many women Islam forms a central aspect of their lives and their lived experiences. While religion itself is a highly contested term, there is little doubt that to many it provides a spiritual framework with which to view and experience the world. This spirituality serves as a counter-point in a world in which rationality is valued above all other systems of meaning.

One of the movements in the Islamic world that has attempted to bring together feminism with Islam is what is called Islamic feminism which is a form of feminism concerned with the role of women in Islam and generally advocates for women’s rights, gender equality, and social justice grounded in an Islamic framework and has more or less flourished in several places, particularly Iran, Morocco, Egypt, Malaysia and the United States.

Scholars and activists within this field are attempting to dismantle misogynist interpretations of Islam in different ways because religious texts and the relationship of religious and state institutions in Islamic society constitute the main battleground on which many of these debates take place, whereby these texts are constituted as either inherently patriarchal or are conceptualized as needing re-interpretation that would allow for feminist readings.

The focus on patriarchal interpretations of the Qur’an and Hadith tend to center on men as interpretative authorities and ignore movements that call for more inclusive or feminist readings of these texts.

The Islamic feminist project can be seen as an important attempt to challenge traditional male interpretations that have dominated for centuries and the act of re-interpretation is a challenge to this, and constitutes an attempt to imagine and construct a different reality, which is already an exercise of power.

A reality that in my opinion is ignored to the peril of both mainstream Western feminism as well as that of the Islamic leaders in the broader Muslim community – in other words we should not reproduce in our own community the processes of exclusion we experience as minorities within other communities.