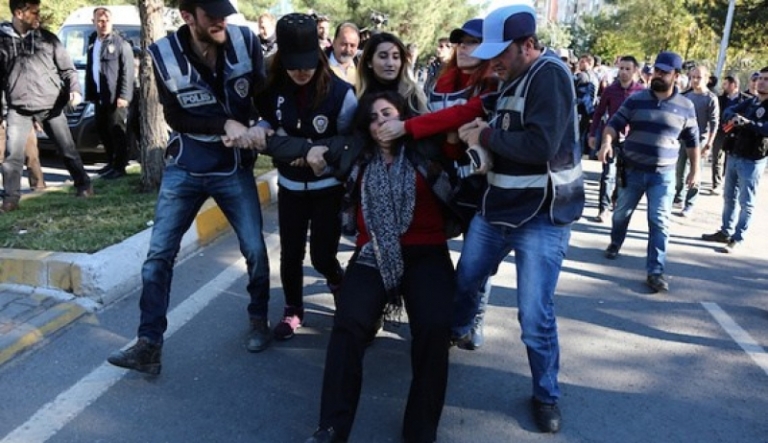 The replacement of democratically elected HDP/DBP mayors and local municipality workers by AKP appointees is a grave threat to democracy in Turkish Kurdistan and the larger region.

In the aftermath of the July 2016 coup d’état attempt in Turkey, president Recep Tayyip Erdoğan’s Justice and Development Party (AKP) has dismissed, detained and in some cases imprisoned co-mayors from 51 majority Kurdish local authorities across South East Turkey (North Kurdistan), replacing them with appointees from the AKP. The majority of these co-mayors belong to the AKP’s leading opposition parties, the People’s Democratic Party (HDP) and its Kurdistan branch the Democratic Regions Party (DBP). Mass layoffs and detentions of municipality workers, again a majority of whom were Kurdish, followed, alongside an occupation of the municipality buildings by the Turkish constabulary forces. Amongst the seized municipalities are North Kurdistan’s de-facto capital city of Diyarbakir (Amed) and other politically consequential cities such as Van, Mardin, Siirt and Dersim.

The capture and occupation of the local authorities is symbolic of a new phase in repression against the democratic opposition in Turkey, following the failed military coup in July 2016.

Despite spurious charges of links to ‘terrorism’, the recent authoritarian moves by the AKP are targeted at the larger Kurdish freedom struggle. They have, to date, imprisoned over 6000 HDP/DBP members, arrested over 2000 more people from the Kurdish youth movement, trade unions, social movements and NGO’s, and suspended more than 12000 employees of the Confederation of Public Employees Trade Unions (KESK), the Left trade union that represents a majority of public servants across Kurdistan.

In September 2016, in the initial days of the AKP occupation, the DBP discussed how it should refer to the AKP mayoral appointees. It was decided that instead of ‘trustees’ as described by the AKP, the DBP would use the word ‘appointees’ and its corresponding work in Turkish, kayyum, to reflect the word’s autocratic political and historical significance. The DBP also had to agree on strategies of resistance to, and interactions with, the occupying administration. A unanimous decision was made to engage in a passive resistance against the new appointees. This meant the DBP would reject any close cooperation or promotions offered by Ankara, though members would also not risk being easily sacked.

When 10 leading MPs from the HDP, including its co-chairs Selahattin Demirtas and Figen Yüksekdag, were imprisoned in November 2016, widespread protests erupted across Kurdistan, Turkey and the world. Yet, the occupation of local authorities across Kurdistan, an incendiary situation, and one that is far more perilous to democracy on the ground, has generated little response from the ‘mainstream’ international community.

The detention and imprisonment of elected local representatives and municipality workers, many left to languish in solitary confinement, must be considered as the crossing of a red line. The recent decision of the European Parliament over any further negotiations on Turkey’s membership in the E.U. must be weighed in light of these provocations.

Militarised Occupation of the Municipalities

In the first stages of the occupation, special forces units seized the municipality buildings to search offices and confiscate files belonging to the administration. Police officers, laden with heavy weaponry, lined the corridors of all the municipality buildings; whilst plain clothes agents constantly moved throughout the building repeatedly entering and exiting offices as a means of harassment and intimidation.

After the seizure of the municipality buildings, Ankara sent their new appointees, who were instituted under heavy militarised guard. The Turkish state also implemented several bureaucratic measures that allowed municipality workers to enter their offices only under special circumstance and extensive state control. No one was allowed to enter the local authorities without an official ID, and full body searches became standard. The control and harassment also extended to workers’ use of the internet with various websites blocked, and workers fearful of visiting websites that might be deemed oppositional to the Turkish state. Email is heavily monitored, and workers limit their communication to the minimum necessary to do the job.

In light of these measures, and averse to entering police occupied spaces, members of the public who had frequented the local authorities under the previous administration, soon stopped coming. Additionally, the police instituted new bureaucratic procedures that meant it could take weeks for anyone not employed by the local authorities to gain permissions to access the municipality buildings. Municipalities that had previously expressed an ethos decidedly welcoming and open to the public were transformed overnight appear more like a prison.

One of the initial steps taken by the AKP-appointees was to remove the administrative staff and replace them with law enforcement officers. In Diyarbakir, the mayoral appointees gave municipality workers as little as a week’s notice of the changes that were going to be instituted, and many workers had scarcely a day to clear out their offices. Municipality department heads were fired and replaced with loyal AKP supporters. Departments were then reconfigured with staff being moved between departments without consent as if they were pieces on a chessboard.

At the outset of the occupation, the AKP attempted to replace the elected city councillors with appointees in the local authorities as a means of gaining a political majority for their party. Yet this strategy was abandoned following the assassination of two appointees and the mass resignations that followed in their wake. There were also considerable dilemmas over governance, where opposing views on economic policy led to an impasse between the AKP appointees and the local city councillors over approval of city budgets. The stalemate resulted in the AKP simply ignoring their colleagues, and failing to convene meetings of the local councils.  As the mayoral appointees rule by decree, rather than through policy generated by civil servants in specified departments, deputies remain largely disempowered and local governments unable to function. Repeated lawsuits have been powerless to change the situation with courts unwilling to challenge Ankara.

Earlier this month, the central Turkish government decreed that the more than 1200 employees of the HDP/DBP municipal authorities (even from municipalities where no ‘new’ administrators have been appointed) were to be permanently suspended from their jobs, a punitive decision that came without warning. Those who have been fired join the more than 1200 others who have lost their jobs since September 2016, with a multiplying effect of up to 7000-10000 as municipality employees are often the sole breadwinners. The sweeping dismissals have been enormously successful in sowing fear amongst the general population of similar ‘retribution’. Whilst dozens of other municipality workers made the decision to resigned their positions in protest, not wishing to cooperate in any way with the occupation.

The autocratic measures taken by the AKP have been instituted in an attempted to either intimidate or mollify any opposition to its power. These actions should be understood within the context of Ankara’s abject fear of widespread resistance in Kurdistan, and signal an ominous future for democracy in Kurdistan and across Turkey.

Local elections in Turkey will be held again in March 2019. The authoritarian actions taken by the AKP alongside active resistance of the Kurdish population in Bakur (South East Turkey / North Kurdistan) will ensure a short lifespan for the current regime. Many in HDP/DBP as well as the larger Kurdish freedom struggle have stated that until that day, rigorous self-criticism of the movement and its objectives be considered.

Nevertheless, many fear that the AKP will utilise this time to destroy the social and cultural projects initiated under the HDP/DBP administration. Community projects, developed after years of discussions and experimentation, including Kurdish language schools, festivals and cultural centres, memorial-projects, after school programmes and community houses have been suspended across Bakur. In cities like Cizre, Diyarbakir and Silvan the systematic dismantling of projects commemorating those murdered, tortured and displaced in the Kurdish freedom struggle over the past forty years illustrates not simply the contempt of the current state towards its minority citizens, but how thoroughly its vacated any future possibility of peace negotiations over the so-called ‘Kurdish question’.

The Turkish military’s bombing campaign in the summer of 2015 killed thousands and levelled dozens of districts across Bakur. To this day, cities remain in rubble with Turkish military and police forces refusing to allow family members to return to their homes to claim belongings, and a virtual blackout of the press covering any aspect of the ongoing hardships communities face attempting to remain and rebuild.

Instead, the Turkish government has shamelessly seized upon the destroyed districts to force through neoliberal development ventures that will directly benefit Ankara. These projects, alongside the capture of the municipalities, are all a part of the AKP’s larger aim of codifying its neoliberal and Islamist values and consolidating its power. Interweaving projects and resources with local politicians and companies close to the AKP will generate an incumbency that is perhaps less discernible but more hegemonic.

Across Kurdistan today, the Turkish state openly appears as occupying power. Veneers of democracy or pluralism, though they have in reality never adequately characterised Ankara’s relationship with the Kurds, crumble. The West’s principle alibi for continuing its blood-soaked ‘special relationship’ with ‘moderate Turkey’ isn’t on principle at all, it remains only for the purpose of averting the gaze of the world from the political catastrophe of its policy-less policy on migration. The callous short-sightedness of the West and its refusal to act now to prevent the possible integrants of a third world war jeopardises the safety of not only the Kurds, but people the world over.

The Kurdish freedom movement, though wounded, remains undeterred and unbowed. Even where the state has, for now, been able to appropriate all power on a local level and act with impunity, it is unequivocally lost all legitimacy. Its browbeating of the population who fear open protest on the streets, only signifies that the AKP is but a paper tiger that will soon fall.

Ercan Ayboga still works in the town administration of Diyarbakir (Amed) and is co-coordinator of International Relations and heritage sites, including the urban Tigris River project. He is a co-author of Revolution in Rojava: Democratic Autonomy and Women’s Liberation in the Syrian Kurdistan (Pluto Press, 2016)

Farah Azadi is editor of Steal this Hijab and co-coordinates Saoirse Jin, an Ireland based women’s Kurdish solidarity campaign.